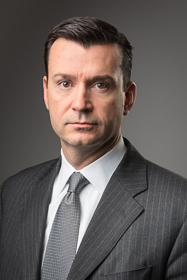 David F. O’Connor is one of the founding partners in Roy O’Connor LLP. Prior to founding the firm, David was a partner in a large national law firm in Canada. His practice is now focused on, and essentially split between, corporate/commercial/shareholder litigation and class action litigation.

David has been recognized by Benchmark Canada (the guide to Canada’s leading litigators) as a litigation star in class actions and commercial litigation every year since Benchmark’s arrival in Canada (2012), with peer praise and respect for his “prowess” in both areas.  David was also noted by Benchmark as one of the 50 litigators in Ontario who were awarded an additional “Honourable Mention”.

David was named as one of the finalists for the Top 25 Most Influential Lawyers in Canada in 2015 and again in 2016, as nominated in Canadian Lawyer magazine. He was also recognized as a finalist for the Benchmark Canada national award for Class Action Litigator of the Year in 2015 and again in 2017, and plaintiff counsel of the year in 2019, 2020 and 2021.

He is ranked in the Chambers Guide to Canada’s Leading Lawyers in the area of Class Actions, with one source quoted by Chambers stating: “I hold him in the highest regard. He’s a brilliant guy and when he’s on your team he’s a huge asset. He has great courtroom presence and a superb intellect.”

David is also a Lexpert® ranked leading class action litigator. David has also been listed in the Lexpert Special Edition of Lexpert – Canada’s Leading Litigation Lawyers – as published in the Globe and Mail’s Report on Business.  He was also listed in the Lexpert Guide to the Leading US/Canada Cross-Border Litigation Lawyers in Canada.   In 2006, he was first recognized by Lexpert® as a finalist for the top 40 under 40 ranking in Canada.

David is ranked by The Best Lawyers in Canada in the area of Corporate and Commercial Litigation.

David is also a Fellow of the Litigation Counsel of America. The Counsel is an invitation only trial lawyer association composed of less than one-half of one percent of all litigation lawyers in North America.

On the defence side, he was, for example, successful recently (January 2021) on behalf of defendant corporations and individuals in defeating a motion for certification in an investment/financial advisor proposed class action involving claims of breach of fiduciary duty, breach of trust, oppression, etc.  By way of further example on the defence side, David was successful on behalf of defendant directors in defeating motions for certification (involving claims of oppression/shareholder disputes) and for leave to commence a secondary market securities class action seeking over $200 million in damages – that case was the first time that any court in Canada had rejected an application for leave to commence such a securities claim. David was also successful in striking out a $200 million product liability class action against Toshiba. He has successfully negotiated and/or argued for the termination of other class actions. Among other defence retainers, David is currently defending corporations and/or directors and officers in various proposed class actions.

On corporate/commercial litigation (non-class action), David has been involved in many cases over his 29 years of practice. He has been successful in pursuing and resisting various claims, including oppression claims/shareholder disputes, seeking tens of millions in damages against multi-national corporations as well as individual directors. For example, David successfully acted for the City of Waterloo in connection with various complex claims by the City arising out of a $50 million financing. David is currently involved in various actions and applications involving, among other things, oppression claims, breach of fiduciary and contractual duties, directors’ duties and liability, misappropriation, unfair competition and solicitation, Mareva (freezing assets) remedies, complex expert issues and shareholder remedies.

He is one of the Editors for the Canadian Institute’s Class Action Review. David often speaks about various litigation topics, including class actions, oppression/shareholder disputes and director’s liability, at conferences and law schools.